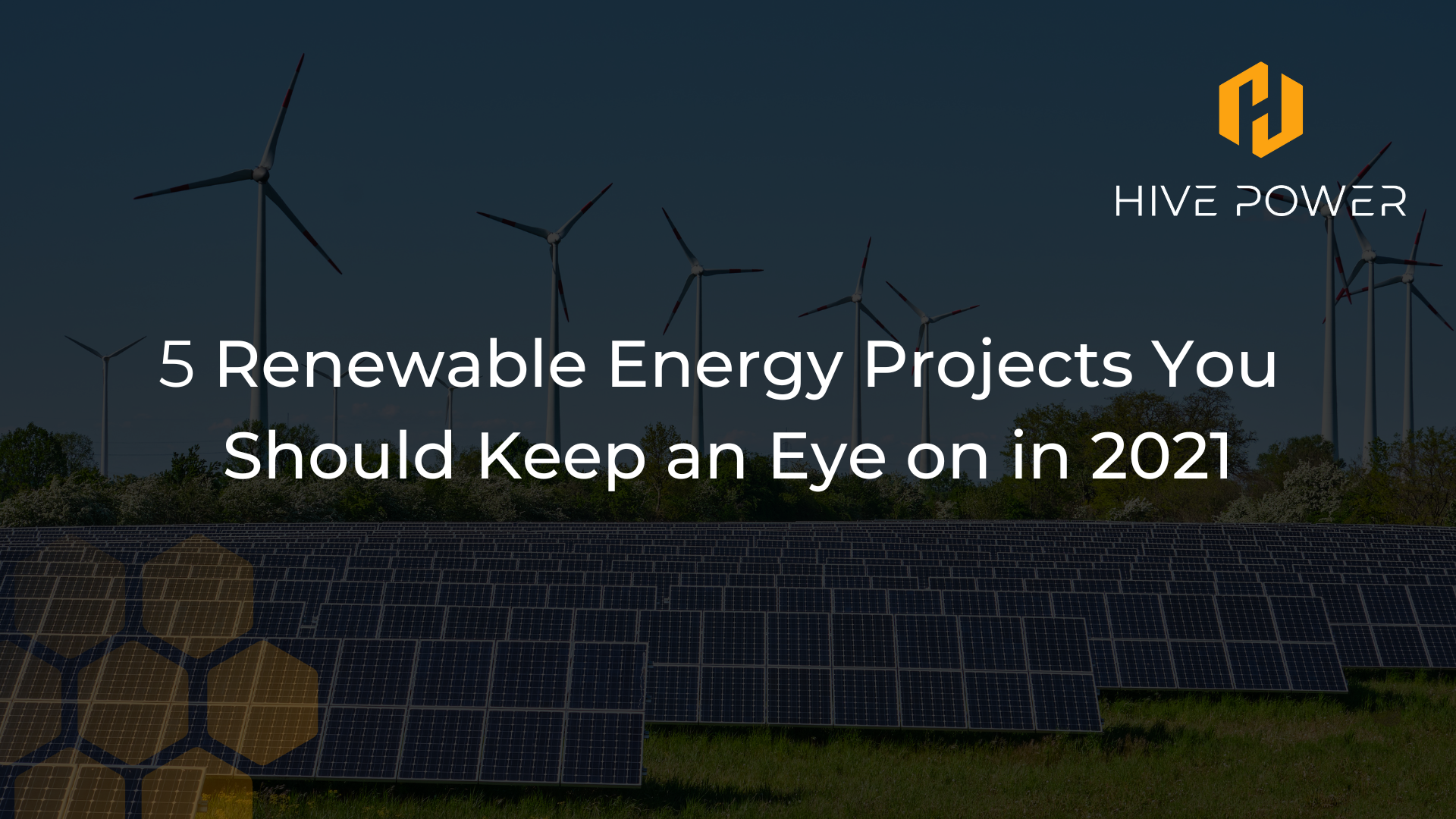 As the use of fossil fuels increasingly becomes a thing of concern, renewable energy, on the other hand, is picking up steam as a more sustainable and widely accepted alternative for energy production and consumption. Renewable energy technologies (RES) are getting ever more advanced with big tech companies such as Tesla and countries worldwide trying to outdo themselves and demonstrate the innovative potential of these new technologies from replenishable sources.The objectives of these projects primarily are to slowly phase out pollutant fossil fuels, meet expected renewable energy targets, and optimize the new energy exportation landscape.Here is a list of five projects from around the world to look out for in 2021:

The TuNur project is a power plant with a 2,250MW solar CSP located in the Sahara Desert. It also has a 2 GW HVDC submarine cable that runs from Tunisia to Italy. The plan is to generate around 9,400GWh of total renewable energy dispersed every year to other European countries such as Germany and Switzerland.[caption id="attachment_8303" align="aligncenter" width="1920"]

Image: TuNur.nr[/caption]The Tunisian government has found that they have an abundance of solar and wind renewable energy sources that can be utilised to yield the set target of 30% renewable energy use by 2030. This has allowed them to enter into partnerships to harness this opportunity and promote a series of projects in all concerned technologies and varying capacities. One of these is the one with Nur Energie, named TuNur which is looking to become the leading renewable energy developer in the region.TuNur is concerned with filling the renewable energy gap in Europe and consolidating the immense development of solar and wind energy in Tunisia and North Africa.

Image: pecanprairiesolar.com[/caption]ConnectGen chose Leon County for solar technologies development due to its proximity to an already existing transmission system, which at the start of 2020 had produced enough power to supply 498.637 homes in Texas. It is expected that there will be a 13,310 MW added capacity introduced to the Texas renewable energy sector over the next five years. Construction of the Pecan Prairie solar project area will begin in 2021 with operations to begin in 2022. This project's advantages include tax revenue generation for the Lone Star state, creation of local jobs, and community support. ConnectGen focuses on developing best-in-class wind, solar, and energy storage projects in America to increase the supply of low-cost clean energy domestically produced.

This project in the Democratic Republic of Congo (DRC) is meant to be developed in seven phases beginning with Inga 3, which has 2 phases. The hydropower use of the Inga river in the DRC is very complex and already has two facilities, Inga 1 and Inga 2, built in 1972 and 1982 respectively which currently provide a substantial amount of grid electricity. This 5-dam complex is expected to generate 42GW of power, holding 52 turbines each, which would make it the world's largest hydroelectric dam at completion.

Congo cannot utilise all of the power that this project will generate, so, they will export most of it to other African countries such as South Africa via a power line running through Zambia and Namibia. The plans for this project started as far back as the '50s when some European countries expressed interest, such as France, Belgium and China, not eliminating a few African countries. Inga 3 will approximately cost $14 billion with Angola committed to buying 5000MW once operational. However, this project is overshadowed by a few concerns surrounding environmental impact as per loss of biodiversity, and social impact in the form of displaced communities.

Hornsea 2 has been in development since 2015 by the Danish company Ørsted intended to be part of the larger Hornsea zone a few kilometres of the coast of East Riding, Yorkshire. The power of the wind is the core energy source for this project. Ørsted is the leading company in offshore wind utilisation. It has taken up the responsibility of building the world's largest wind farm off the UK's coast generating clean energy for UK homes. [caption id="attachment_8302" align="aligncenter" width="2560"]

Image: hornseaprojects.co.uk[/caption]Hornsea 2 will have 165 turbines with a capacity of 1.4GW providing power to well over 1.3 million homes. In 2019 onshore cable construction was started with the wind farm and HVAC substation. Turbine installation will commence in 2021 after which startup should commence. The wind farm is expected to connect to the grid at the North Killingholme National Grid transmission station in North Lincolnshire.

Saint Brieuc has been projected to have a total installed capacity of 496 MW, which should generate clean energy for approximately 835,000 people, and it is located 16 kilometres off the coast of France with 62 SG 8.0-167 DD turbines. [caption id="attachment_8304" align="aligncenter" width="770"]

Image: iberdrola.com[/caption]Brittany, where Saint Brieuc bay is situated, is prone to immense winds and high tides. Hence, it makes sense that it would be one of the first large-scale offshore wind farms to receive all the necessary documentation and permits from the French government for its creation and operation. Offshore operations are expected to start in 2021 with Dutch marine contractor Van Oord installing the substation and pin piles. The total investment in this project is said to be 2.4 billion euros.Our list is in no way exhaustive because renewable energy has slowly grown from being a niche only sector to a completely pivotal market creating high demands that must be met. Projects are springing up across the globe in the private and public sectors, from Europe to Africa to Australia to Asia and back. Clean energy seems as though it should now be crowned the 'Pure Gold' of our time taking over from the much-acclaimed 'Black Gold'.