How Electric Vehicles Will Help Stabilize Distribution And Transmission Grids. 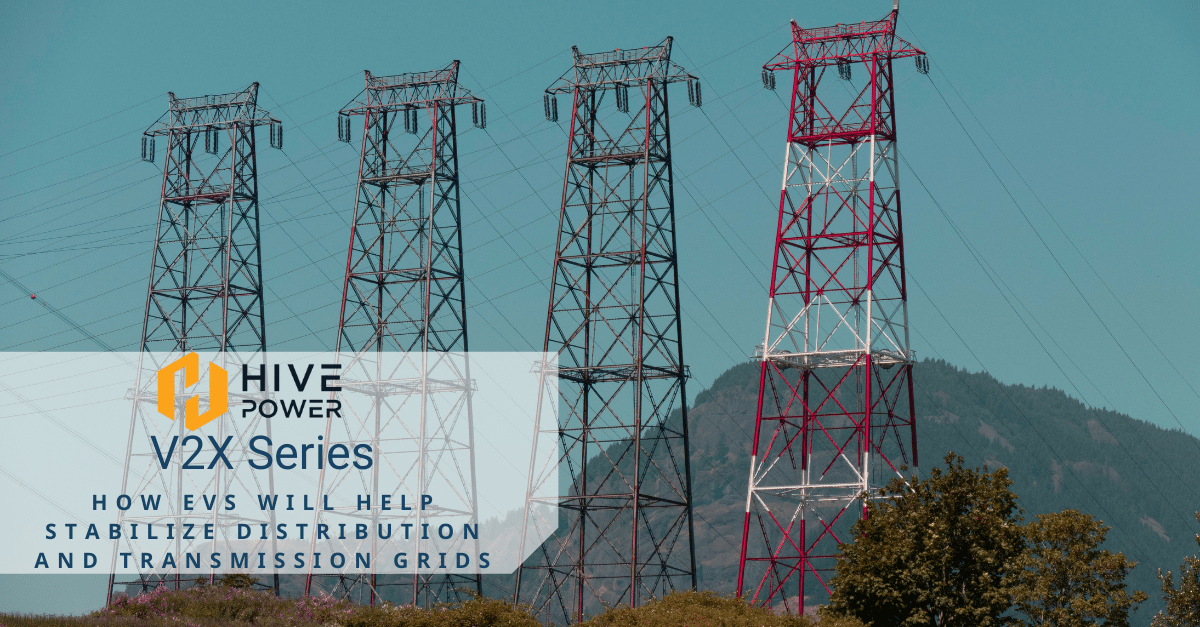 Electric vehicles are powered solely on electricity from batteries (usually lithium-ion batteries), which have large capacities to store power for a long time. Therefore, a person leaving home with his car fully charged is not likely to get stranded overtime all through the day, and it is almost equivalent to how you would carry a charged smartphone around with confidence. However, this effective storage capacity found in electric vehicles has other applications that I am interested in, related to the stability of the electric power grid. The power grid consists of distribution and transmission lines, which may look similar but are quite different. Transmission lines move power at very high voltages from where it is generated to distribution substations, closer to where it is needed. Furthermore, the distribution lines convey power at lower voltages to points of demand and consumption, like industries, offices, homes, malls etc. How do electric vehicles come into play? I’ll explain in a bit.

Why Is The Stability Of Transmission And Distribution Grids A Point Of Concern/Interest?

In a typical grid, there has to be a constant flow to ensure the longevity of the lines. Well, most of the grids we see today have existed for more than fifty years, and they were not made for the recent renewable energy introductions we have now. Renewable energy and decentralized energy resources are new to the grid and they disrupt the initially planned mode of operation.Renewable energy sources like wind and solar energy have a stochastic nature; it is not easy to predict the amount of power they would generate at certain times. In Europe, the leading source of power from the renewable energy mix is wind power, which constitutes up to 426 TWh. The market capacity for wind power generation is also projected to be 17 GW by 2022 and 483 GW by 2050, but wind energy supply fluctuates. Unfortunately, with these projections, it is clear that renewable energy is increasingly popular, and the power generated can best get to the consumers via the existing grid.In the power grid system, for there to be stability, the amount of power generated has to be consumed at that instant. However, with the fluctuating nature of renewable energy sources, this stability is not easy to achieve without introducing new strategies and techniques. One of these ways is to integrate electric vehicles into the grid for stability. This is how:

How We Can Attain Grid Stability With Electric Vehicles

Like I mentioned earlier, electric vehicles have batteries that can be charged at charging stations and are used to power them when in use. However, research has shown that drivers park their cars up to 95% of the day. Essentially, electric vehicles are very effective as energy storage devices as the batteries can get charged and discharged at times when necessary. Interestingly, batteries become used more efficiently for bidirectional charging than when it just gets charged and used even with unidirectional smart charging.Depending on the amount of power generated in the grid by its sources and the demand, there is peak load, i.e excess demand, and other times off-peak load, i.e lesser demand than the power generated. That is where electric vehicles come into play through smart charging and V2G (Vehicle-to-grid) technologies.For V2G to run well, smart technologies are in place to enable communication between EVs and the grids. So, intelligently controlled EVs can sell off power to the grid during peak load, while it’s connected to the charger. In the same way, with smart charging, charging is done during off-peak hours, and it is possible to control how much power is used.

The Current Status Of Electric Vehicles In Relation To Grids And What To Expect.

The implementation of V2G has not taken off as much as it should, but the journey to its full use has started. Recently, makers of electric vehicles have been encouraging the use of V2G by having trials for EV users. Consequently, more electric vehicles are now smarter, and their chargers too. Also, applications exist to make the communication between these devices go smoothly without hitches, and this is what V2G needs.The EV market is growing fast, and the number of electric vehicles is expected to reach up to 140-240 million globally by 2030, according to the International Energy Agency (IEA). As more people adopt electric vehicles, the grid operators need to be prepared for the energy demand and dynamics.

To integrate plug-in or hybrid electric vehicles into the grid, I have seen that we need more than just the technologies. We need agreements to be made by the government, energy utility firms and EV makers. When these agreements are in place, achieving a stable grid with V2G adoption will be easier. There are a number of notable V2G projects ongoing across Europe.A power firm in Europe, E.ON, has been working with Nissan to ensure development in V2G since 2019, but there is still a lot more work required to become fully adopted with electric vehicles. They successfully deployed twenty (20) V2G chargers in the trial they started, verified on Nissan Cranfield's site. That first trial examined how participating businesses/offices can gain by generating revenue while giving to the grid.More recently, they sought for more participants to do the next stage of trials. With the UK funding available, all participants would enjoy incentives and a highly subsidized V2G package. According to the V2G Programme Manager with E.ON UK, this is a step closer to bringing V2G chargers to the market. Before the project started, two NISSAN EVs were already enabled with V2G capabilities, that is, LEAF and e-NV200, and are being used for the trials.Also, in the Netherlands city of Utrecht, Renault launched a trial in 2019 with 15 Zoe vehicles. This trial was done in collaboration with an electric driving company, We Drive Solar, and an energy supplier in Portugal, Empresa de Electricidade da Madeira. Consequently, more tests were planned for in other countries like France, Sweden, Germany, Switzerland and Denmark.For this project by Renault, onboarding recharging was used to optimize cost. The pilot schemes are to examine the process and maximize the benefits involved. It was also done to stabilize the grid and encourage more use of solar and wind energy systems. Utrecht trials involve 100 V2G solar-powered cars (Sion cars made by Sono Motors) that have been launched alongside 500 bidirectional public chargers. If all vehicles are plugged in simultaneously, they can supply 1.1 MW to the grids.A more recent trial by OVO energy featured the deployment of 320 bidirectional chargers, and so far, it has proved successful. A good number of users even increased the times they plug in from just twice a week to every day, knowing the value of V2G. With the V2G tariff, EV users saved up to £8,000 per year. In relation to grid stability, this trial has also shown a lot of potentials. For example, in early November 2020, 150 of OVO's V2G customers responded when there was a need to stop a power outage. They successfully sabotaged the situation by plugging in their EVs.Not to undermine the current developments, but the charging standards still have to be improved, though a lot of progress has been made like CHAdeMO. This is because not all brands of EVs and EV chargers have adopted the existing developments. However, if we can integrate enough EVs into the grids, there would be little or no struggles with renewable energy sources giving power to the grid, and this would strike a balance through and through.This blog is part of a V2X series. Continue to the other blogs in the series.