Outlook on the Diffusion of Lithium-Ion batteries for Grid Storage 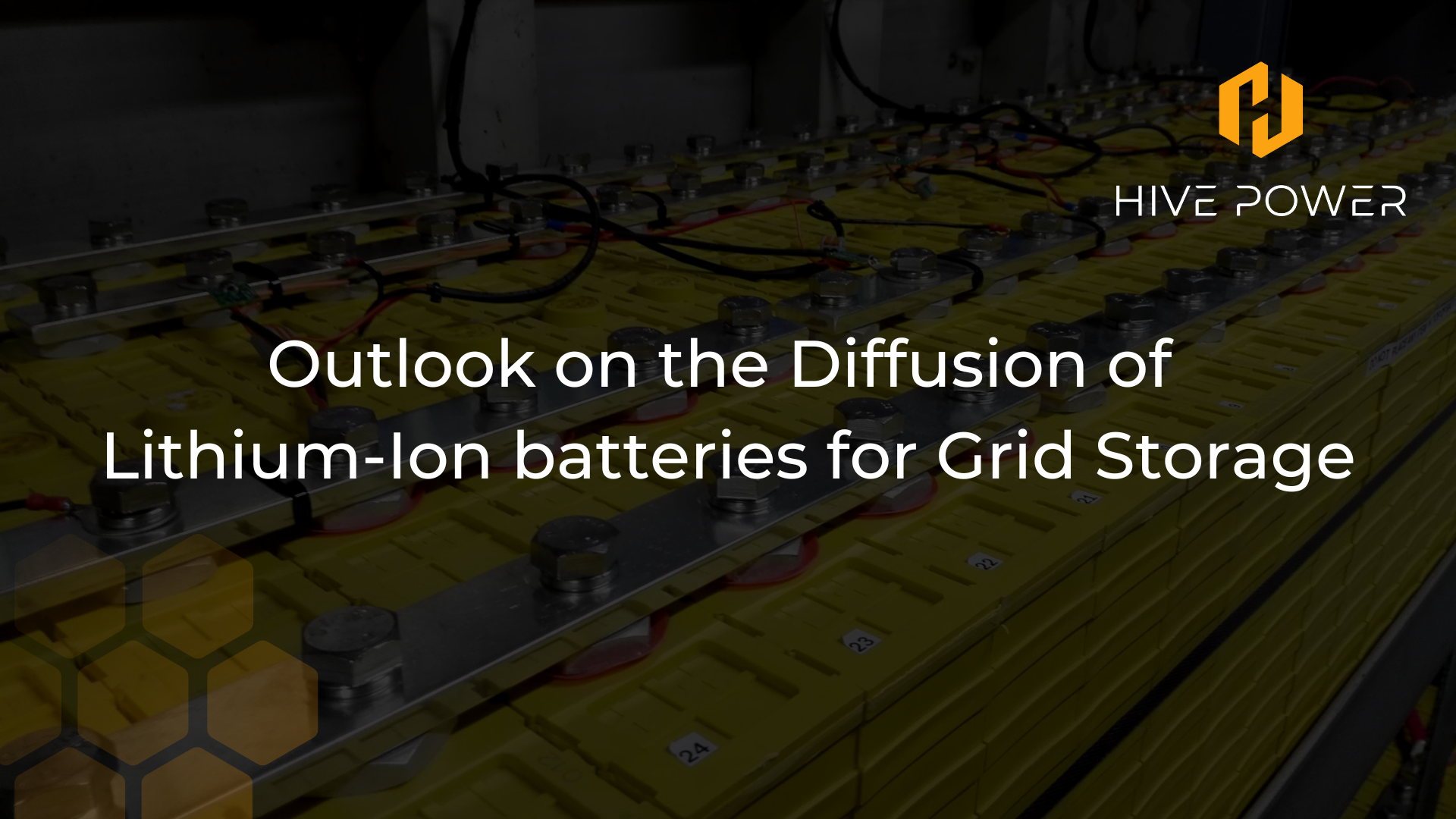 As an energy consumer, your general expectation is for the lights to go on whenever you flip a switch. When you plug a device into any socket in your home, you expect the power to flow immediately. That's if you have paid your bills on time of course.

You may base your expectations on your trust of the regional electricity grid, which works on the premise that the grid has an endless supply of power. Yet, the truth is far more intricate. This article focuses on how your electric grid works and the role played by lithium-ion batteries.

The Grid: What is it, and how does it work?

The grid is designed to deliver power seamlessly whenever you need it. However, the distribution of electricity is a lot more complicated than flipping a switch. The grid connects you to a wide variety of electric power producers from various locations. These power plants also generate electricity from a wide range of sources, including fossil fuels, solar, wind, and hydropower, among others. The grid relies on several tech solutions to do its job effectively.

Electricity presents a façade that it is always available in your power outlets waiting to be used, because, when you flip your switch, the grid delivers your power immediately. Yet, the production and consumption of electricity vary throughout a 24-hour cycle.

Your grid operators are continually adjusting power systems to balance the different supply and demand of electricity. During the day, most of the power in urban centres are consumed in offices and factories when people go to work. Yet at night, the bulk of electricity demand is in residential areas to power and light up homes.

The growing popularity of renewable energy has added to the dynamics that grid operators face. The power output of most renewable energy plants varies according to the availability of the resource, which is evident in the cases of wind and solar energy. Wind power is only available when it is windy and solar energy when it is sunny. As such, the grid operators need to manage their electricity supply as well to enhance reliability.

Various countries in Europe and other parts of the world have prioritized renewable energy supply. In these cases, electricity generated from renewable resources must be purchased immediately. Yet, renewable energy plants often produce more power than the grid requires. The grid operators can shut down fossil fuels and thermal power plant to preserve fuel when the electricity demand is low. Yet, you cannot switch off the sun or wind. This excess supply of electricity is the reason for the development of Grid Energy Storage systems.

Grid energy storage is also known as large-scale energy storage. By definition, the reference to the storage of excess electricity is a paradox because electricity itself cannot be stored1. However, you can convert it to other forms of energy that can be stored and turned back to electricity on demand. This conversion of electricity into storable energy forms is the technology behind Grid Energy Storage.

The most common type of grid energy storage is used in hydroelectric power systems. When electricity is cheap, or demand is low, the plant operators pump water to a high dam or reservoir. This water is then released during peak demand through pipes to drive power turbines1. Several other types of grid energy storage include batteries, rail energy, flywheels, supercapacitors, and others.

Batteries work by converting electricity into chemical energy which can easily generate electricity on demand. The power stored in batteries can only be produced as a direct current (DC). Yet, the grid typically operates with alternating current (AC). As such, battery storage power stations need additional electronic components such as inverters to convert the DC power to AC.

The use of batteries to support the grid began in the 1980s with lead-acid batteries. As different minerals and technologies reduced in price, Nickel-Cadmium and Sodium-Sulphur batteries became popular. Since 2010, Lithium-Ion batteries (LIB) became the technology of choice for small and large scale storage applications.

The popularity of Lithium-ion Battery for Grid Storage

Lithium-ion batteries currently represent more than 90% of the grid battery storage systems in the world. The cost of lithium batteries has been consistency going down over the past ten years. Like solar energy, the reduced prices have made the lithium-ion technology significantly profitable.

As such, more grid utilities are moving away from conventional batteries and investing in lithium-ion batteries for power storage. In the US, utility providers have moved from using about 80.6 MWh in storage in 2013 to almost 650 MWh in 20172. Apart from affordability, here are a few reasons why Lithium-Ion batteries are becoming increasingly popular.

Energy density is the amount of energy a battery contains per unit of mass or capacity. Defining the density of a battery by its weight is termed as Gravimetric Energy Density. It is measured in Watt-hours per kilogram (W-hr/Kg).

If you define the energy density by the capacity of the battery, it is called volumetric energy density. Lithium-ion batteries are so popular because lithium contains the highest energy densities in the world.

If you are familiar with stand-alone solar home systems, you know they use battery banks to provide power at night. However, batteries for grid storage have a more extensive range of applications. You can design these systems to fill the gaps created by inadequacies in the grid. These include

Alternatively, Peak Power is the maximum amount of power that a power supply can sustain. It can only be sustained for short periods ranging from milliseconds to seconds. If it is supplied for more than a few seconds, it can damage the power supply or appliances.

Several motorized electromechanical appliances draw higher amounts of power when starting up than during regular operation. These appliances may require up to three times more power to start. Examples of such devices are fans, actuators, pumps, and others.

Lithium-ion battery storage can provide the additional instantaneous power needed during peak surge power. This setup can save the grid operator from using expensive electricity sources and peaking power plants to meet the gap in the power supply.

Electricity markets are not only driven by power supply but also electricity demand trends. Commercial power consumers understand that the grid electricity rates vary throughout the day. In moments when demand is low, the system charges you on off-peak rates. Yet when the demand is high, energy is supplied at premium prices.

Peak shaving refers to the use of alternative power sources to meet the electricity demand during peak hours keeping your utility costs low without changing your schedules or outputs.

Lithium-ion grid storage systems are excellent for peak shaving applications. During off-peak hours, battery storage power stations can use cheap electricity to charge the lithium-ion battery banks. They can then sell it at a profit during peak hours.

Peak shaving is also gaining popularity with domestic users in demand-side management applications. Home owners charge their lithium-ion batteries using free solar energy during the day. They then consume it at night when utility rates are high.

Smart technologies come in handy when setting up peak shaving applications. You can configure your system to automatically switch between grid power and battery power during peak hours to save money.

Like any complex system, the electric grid often experiences inadequacies or delivery gaps. These are circumstances that result in an interruption in power supply to its customers.

Ancillary services were conventionally performed using power generators. However, advances in energy storage technology have increased the grid operators' options. Ancillary services are now powered by Lithium-ion battery storage power plants, electric vehicles, and renewable energy plants. The list below is some of the most common ancillary services provided by the electrical grid.

Grid energy storage is an ever-growing market with immense potential. The perpetual evolution of the power supply industry demands consistent innovation and reinvention of technology. Lithium-ion batteries provide a competitive, reliable and cost-effective solution in the energy storage space.