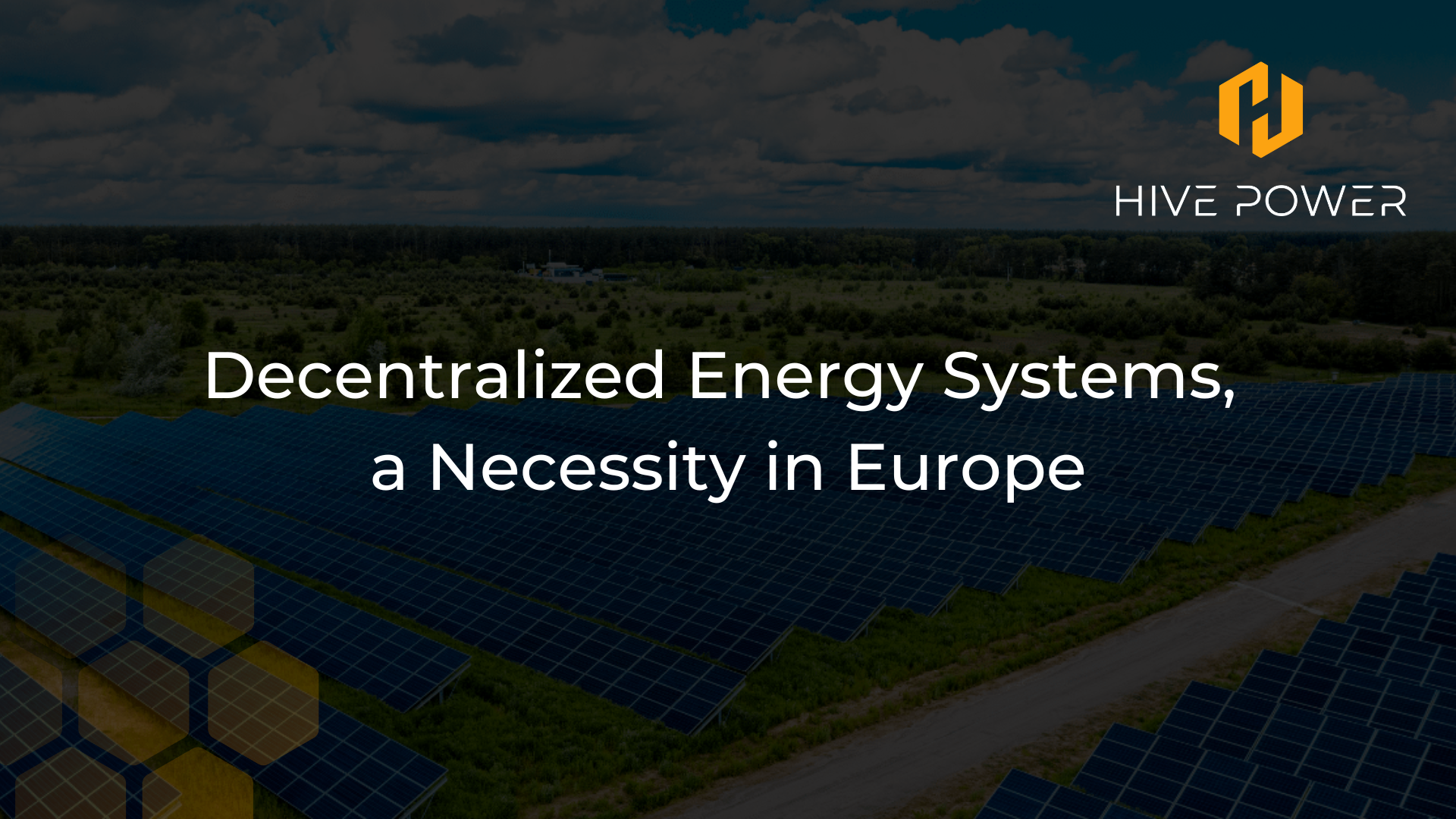 The prevalent system of energy transmission in Europe and, more broadly speaking, the rest of the world right now is the centralized energy management system. This is a system where power is first generated at large power plants situated far from the consumers– transmitted through high-voltage transmission lines and distributed to the end-users using electrical power grids as the intermediary.As ideal as the centralized system may come off, it doesn't exist without its shortcomings, which can be subsumed under the environmental, economic, technical, and social impacts it leaves on grid operators and power suppliers and consumers. Moreover, the rising global adoption of several neo-infrastructural systems designed to replace existing power generation facilities has proven that if smart grids—which are essential to the incorruptible fulfilment of increasing energy demands—are to be sustained, then it is imperative that a more effective, more sustainable system, which has already been established, be proliferated—decentralization of power transmission and management system.

What is a Decentralized Energy Management System and Why is it Important?

A decentralized energy management system is the situation of relatively smaller power generation facilities closer to consumers. Decentralization essentially aims to bridge the physical gap between producers of electricity and its consumers through micro-grids to allow for more optimal use of renewable energy.[caption id="attachment_8741" align="aligncenter" width="940"]

Image: Sandro Bösch/ETH Zürich[/caption]Below, we discuss why we reckon that the decentralized energy management system is necessary for achieving our climate goals and sustainable power grid systems.

One of the leading causes of transmission losses is lengthy distribution lines. When electricity is generated, collisions occur among electrons travelling from one end to another. These collisions result in electrical resistance and, in effect, heat. Without proper harvest and storage, the heat generated from this electrical resistance is lost. The magnitudes of electrical losses in the form of heat are proportional to the transmission distance. In principle, by definition, centralized systems contribute to this failure because of the remoteness of power generation. Decentralized energy management systems fix this through the proximity between supply and demand. Grid operators and energy suppliers benefit hugely from this as they get to adequately bypass expenses that arise from these losses that would have otherwise multiplied unnecessary costs associated with the centralized system.

With decentralized energy management systems, grid operators and energy suppliers can effectively make decisions unencumbered by the intricacies of the centralized system.The centralized system is designed to make its modes of transmission and lack thereof rigid. When we talk about the centralized system, we mean a system where energy demands are mutually dependent on a single supply source to a fault. Suppose an entire state, for instance, is provided with electricity by a central power plant. In that case, all consumers resident in that state are subject to equal and same likely implications such as blackout or transformer power off.This is another fault that decentralized energy management systems hope to fix. With these systems actively in play, communities of consumers need not rely on one specific grid for supply as there are a diversity of options to draw power from should one grid go down. This benefit is two-fold, as it additionally fosters a sense of community among energy players where reliability is built, and a particular power plant does not incur as much damage should its supply system suffer faults compared to an independent system lacking interconnected networks with similar or other power plants.

With larger power plants centrally situated far from end-users, transmission to remote, rural areas becomes a challenge posed by distance, scales of preferences, local acceptance and participation, and financing.Rural communities, by general definition, are no match for their urban counterparts in areas such as technological advancement, economic contributions, and population. These, in conjunction with the challenges we highlighted in the previous paragraph, jeopardize their access to power supply and have their energy needs taken for granted.[caption id="attachment_8270" align="aligncenter" width="940"]

By Reinhold Möller, CC BY-SA 4.0, https://commons.wikimedia.org/w/index.php?curid=68790004[/caption]Through decentralizing energy management, it becomes easier for independent, smart grid operators and energy suppliers to situate local power plants near these rural communities experiencing low or no access to electricity. The presence of these smart grid systems in smaller communities aid in efficient and cost-effective power distribution because of their proximities.

Decentralized energy management systems promote the adoption of smart grids and the integration of the Internet of Things into electrical systems. With the use of advanced metering systems, there's the ease of communication between grid operators and prosumers—who can now, with the integration of smart metering and The Internet of Things, sell back excess power supplied to the grid if they're on-grid or store an excess supply for later use if they're off-grid. Additionally, it allows energy suppliers to monitor closely electrical situations at prosumers' ends, obtain data with ease and work with data received. This relationship between energy suppliers and prosumers within shorter radii helps grid operators and energy suppliers save costs that would have been incurred through excess energy losses, energy theft, and transmission failure.

As a result, rural communities with low population densities and, on average, poorer economies are usually supplied with more power than is needed and cannot keep up with the electricity costs that their urban neighbours can afford. These inadequacies engender gradual rejection of power supply or outright refusal to pay more than is required, leading to more costs incurred by the suppliers. When energy management becomes decentralized, the corresponding power supply becomes more tailored to suit the precise needs of the consumers. Consequently, grid operators and energy suppliers do not have to worry about incurring financial losses due to extravagant electricity supply to ends with minimal demands.Finally, smaller, decentralized power plants cost less to set up, control, and manage than larger, centralized power plants.

With centralized energy management systems comes a monopoly of energy supply services. Consumers are stuck with only one source of supply and have to put up with any quality of service they receive. To minimize or wholly forestall possibilities such as this, energy management systems must be decentralized. By doing so, multiple energy suppliers and smart grid operators are allowed to site their infrastructure close to their target end-users, thus presenting to these consumers an array of options to choose from. Furthermore, an increase in supply drives the need for power players to improve the quality of their services. This competitive ecosystem is a driving force that helps promote the sustainability of smart grids as each energy supplier will be motivated, now more than ever, to seek and employ the best measures necessary for improvement.

7. More Efficient Use of Combined Heat and Power Systems

Combined Heat and Power (CHP) systems generate electricity while also storing the by-product of this electricity generation, which is usable heat, for use in a single process.In centralized energy management systems, the heat produced as a by-product of electricity generation either causes damage or is relegated to disuse. With decentralized energy management systems, on the other hand, this heat can be captured, stored, and be made useful for heating and even cooling functions in households and industries.With adequate utilization of this waste heat, CHP plants can become 80% more efficient than gas power stations in the UK, which are environment-unfriendly and have an efficiency range between 49% and 52%.Decentralized energy management systems are local. Local here does not necessarily mean rural, but rather, not large-scale. Each smart grid can exploit this advantage by trapping waste heat to manufacture local heat in combination with electrical power while preventing energy losses that would have occurred during transmission between centralized power generation sources and their users.

Centralized energy management systems are habitual, and prevalent mode of energy transmission and management in Europe. They come with their merits as well as their shortcomings. The gradual global switch to renewable energy sources informs us of the need to make energy sources sustainable if peak global demands are met without endangering our climate goals and simultaneously putting our supply systems at risk of collapse or disrepute.The decentralized energy management systems come with their technical and economic advantages to local power players and consumers. Supply, demand, and transmission can be easily monitored and executed without extra complexities. As a result, the transmission monopoly is erased, and a healthier producer-consumer relationship is nurtured.