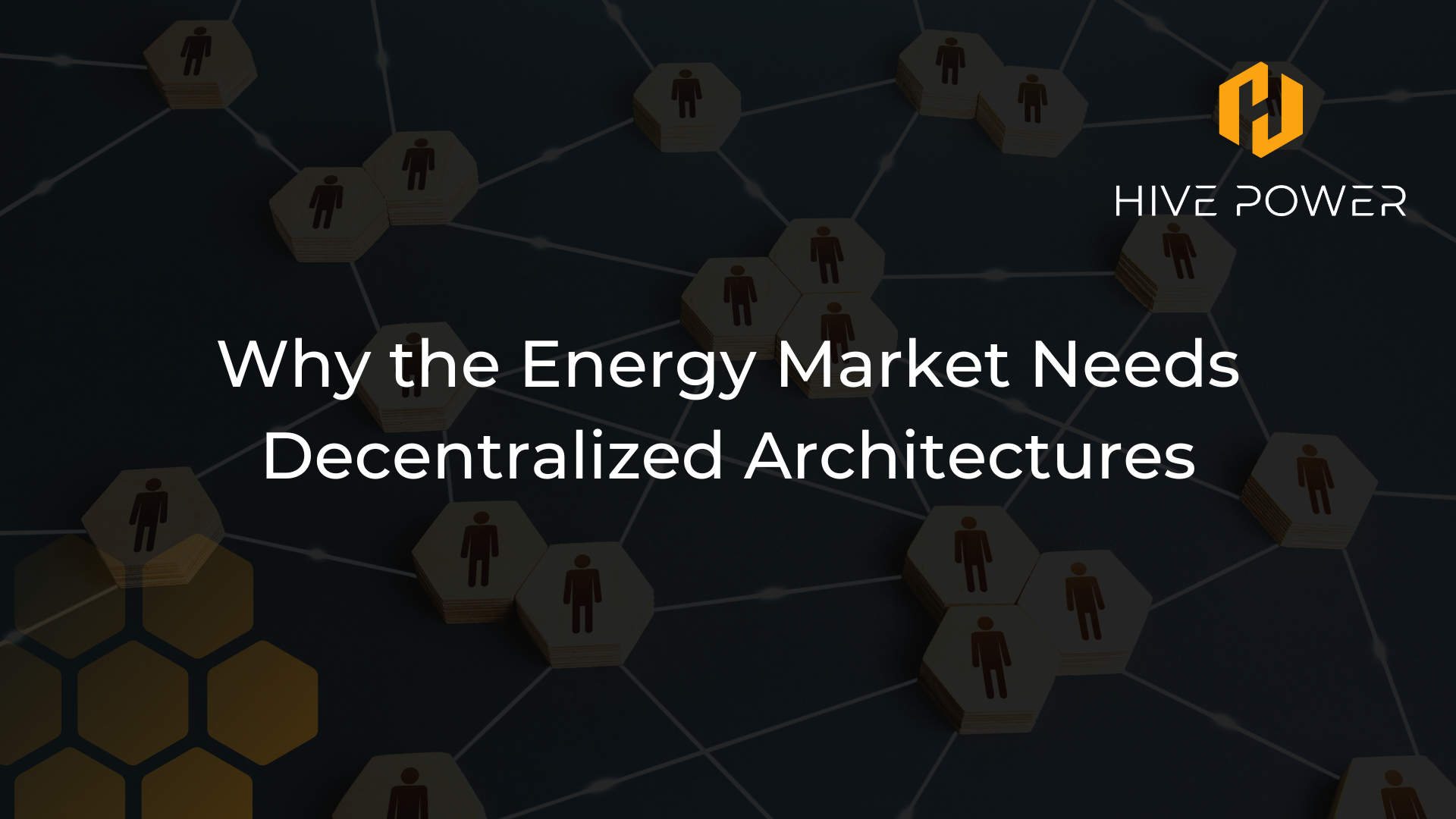 One of the reasons for the high popularity of cryptocurrencies is that they allow a decentralized economic system. This point is unanimously considered pivotal in the crypto world, where the worst insult for a project is calling it ‘centralized’. However, the definition of decentralization is often hardly understood. Even worse, a recent study shows that cryptocurrencies are not so decentralized as one might think, considering that the top four miners in Bitcoin and the top three miners in Ethereum control more than 50% of the hash rate.Decentralization is often explained in terms of the communication architecture of a network, and a distinction is usually made between decentralized and distributed networks. This very famous picture explains the differences eloquently:

The picture is somehow self-explanatory, but we can try to give a tentative definition of the three architectures:

This (very personal) definition makes distributed architectures a subclass of decentralized architectures.This picture was firstly published in 1964 by Paul Baran, a pioneer in the field of computer networks. When Baran published his work, he was considering distributed networks for increasing the resilience of the national communication structure in the context of a possible atomic war:

…it can be shown that highly survivable system structures can be built, even in the thermonuclear era

— Baran, Paul. “On distributed communications networks.” IEEE transactions on Communications Systems 12.1 (1964): 1–9.From this point of view, in which the communication network is operated by a trusted entity (the government) and the architecture has the only purpose to guarantee communication, there is no further need to consider decentralization under other aspects. In this post on the meaning of decentralization, Vitalik Buterin explains why, for cryptocurrencies and distributed ledger technologies, there is the need to expand the definition of the decentralization grade of a system.Briefly speaking, three key aspects can be considered:

Now that we have a good grasp on the meaning of, and problems connected to, (de)centralized networks, we can start to discuss decentralized architectures for energy markets.More and more renewables are being installed in the distribution grid, especially photovoltaics. Solar panels are highly stochastic energy sources with deep volatility. This volatility calls for an increased flexibility of the demand and creates a sweet spot for the creation of energy communities implementing local energy markets. These markets will have 3 kinds of participants:

These three actors could have different motivations in participating to such energy community, among which:

Let us focus on the specific problem of the choice of the architecture for such a market design.First of all, we don’t have to start from scratch, the electrical grid is also a network with its own architecture. The existing Infrastructure is massive. It was developed by billions of dollars and can be divided essentially into:

The network architecture of the electric power grid is also peculiar. In particular, it is divided into different voltage levels. The choice of the voltage level is a function of:

Per unit of length high voltage lines are more expensive than medium and low voltage ones, but the amount of power they can transport and the distance they can cover is much higher, thanks to lower losses. Indeed, raising the voltage by a factor of 10 reduces the current by a corresponding factor of 10 and therefore the RI² losses by a factor of 100.In distribution systems, once the electricity approaches the point of consumption the voltage is gradually decreased thereby decreasing the cost of the lines and reducing the possible dangers in case of a short circuit.

In the above figure, we can see the high voltage (HV) and medium voltage (MV) lines in the region around Hive Power’s headquarter, ranging from 380 kV (red lines) to 50 kV (blue lines).

The low voltage (LV) network, which is much more ubiquitous, like the one shown in the above figure. In the most common case, the topology of the low voltage network is radial, that means it has a simple tree-like structure.This structure naturally partitions the system. From the physical point of view, the effects of a LV network on the upper MV level, can be taken into account only by means of the total power at the transformer. In other words, it is not required to know the power consumption of all the buildings in the LV network at a given time to effectively control the MV level, nor it is required that a prosumer located in the LV A knows about all the energy produced or consumed by all the prosumers in the LV B to effectively exchange energy.And now a very important point:“The mechanism design of new energy markets must explicitly consider the effect of traded energy on the electrical grid. The energy prices must reflect the state of the grid.”This point is essential for understanding how we view the market and its communication infrastructure. In the presence of distributed generation from renewable energy, e.g. PV, the power production gets highly synchronized. This synchronization is a possible hazard for the electrical grid, since it can overload electrical lines. Furthermore, power production from renewable energies is highly volatile, influencing the local power quality.New energy markets are in charge of mitigating the effect of an increasing penetration of renewable generators in the electric grid. Common view among the scientific community is that this could be done by means of demand response programs, in which the energy price is changed dynamically, based on the state of the grid.These considerations lead us to analyze another sub-class of decentralized architectures, which is a very good candidate for decentralized energy markets: hierarchical structures. Hierarchical structures are essentially tree-like structures, in which each node can be a terminal or a branching node. Terminal nodes are the ‘leaves’ of the tree, and have no downwards connections. In our energy markets, terminal nodes are single prosumers.

The picture above depicts an example of a hierarchical structure, in which the blue terminal nodes with a same parent node, are gathered together in a group. Note that this structure is sort of fractal, that is, a group can be seen as a single terminal node when seen from the upper level.Back to the energy markets and decentralized systems!How does this architecture fit into the aforementioned classification, and why does it make sense for decentralized energy markets? Let’s reconsider each point one by one:

Hierarchical structures have also another peculiar aspect which is strictly related to mechanism design, a field of economics and game theory which aims at building market rules that induce a desired effect on the market equilibria. For instance, the CASPER protocol of Ethereum is seen by its creators as the result of applying mechanism design to cryptoeconomy.

Designing a market that turns competition into cooperation

One of the most celebrated outcomes of mechanism design is the revelation principle, that states that:If the market is incentive compatible, we can restrict the study to the situation in which each participant is willing to disclose its private information.This means that no agents would have incentives in lying about their power forecasts nor expected utility of using a certain amount of energy. Let’s do an example to clarify the implications.Consider that each market player would adopt an optimal strategy (in terms of outcomes) given his private information. A player could lie in reporting his private information if he finds he has some advantages in doing so. For example, imagine we have designed a market in which prosumers pay a price proportional to their consumption and, if they consume more than the average, they pay an additional fee. If prosumer A declares he’s going to consume a lot of energy in the next market period, the other prosumers could increase their consumption plans, since they believe to be under-the-average consumers. In the next step, prosumer A consumes much less than the one he had previously declared, but there is no time for the other prosumers to synchronize again with updated information. As a result, A is now an under-the-average consumer. What is happened is that A, lying about his private information, has prevented the risk of paying the additional fee, to the detriment of the others.How can this be avoided? In the simplest form, prosumers (leaf nodes) can agree to communicate their private information to a super-partes entity (their parent node), which would play the optimal strategy for them. Finding the optimal strategy generally involves solving a pre-defined optimization problem. The important thing is that each prosumers has previously agreed on how this optimal strategy is found, and that all of them consider the super-partes entity as trustful. In this case, prosumers have no interests in lying, since doing so they would incur in a payoff reduction, by definition!In view of the above mentioned benefits, at Hive Power we decided to design our distributed energy market platform making use of aggregators. Of course these aggregators should either be trusted or, even better, auditable.In my next posts I will discuss how we will:

I will also discuss alternative solutions for the intra-group communication. Stay tuned!At Hive Power we are enabling the creation of energy sharing communities where all participants are guaranteed to benefit from the participation, reaching at the same time a technical and financial optimum for the whole community.Key links: