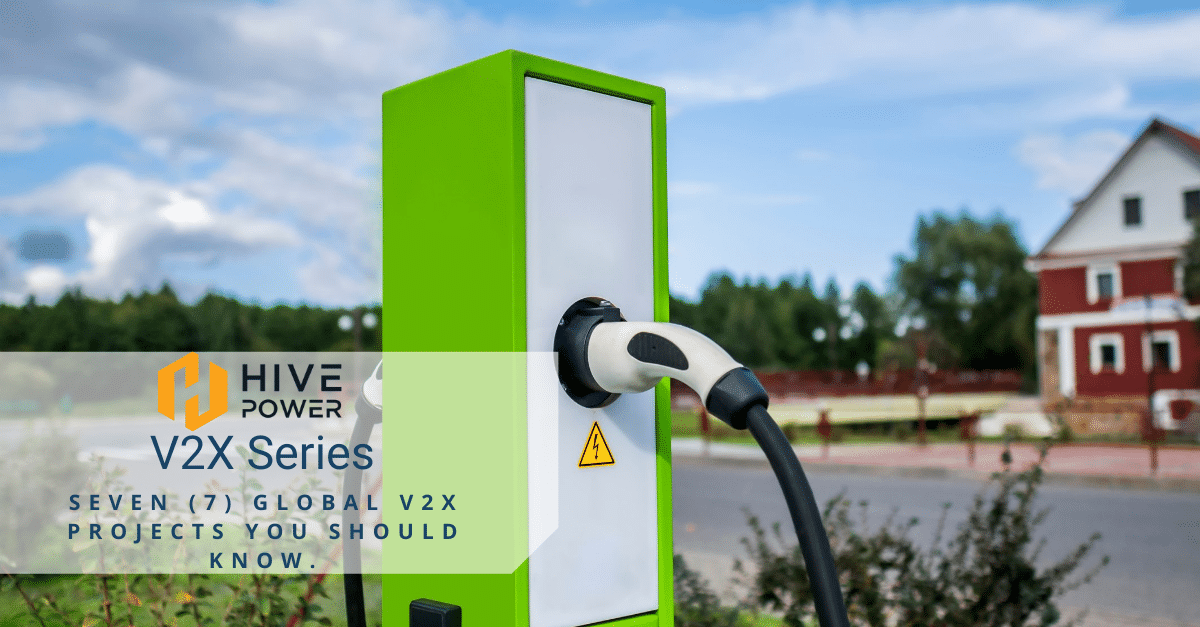 A good number of projects and demonstrations of V2X/V2G applications have been done worldwide. Most of these projects have been done in North America and Europe.As of 2018, half of V2G projects worldwide were located in Europe. We can link this to the increased interest in V2X across Europe and the adequate support from the government and private bodies.Beyond Europe, I am looking forward to seeing more energy stakeholders worldwide, especially DSOs, kickoff more V2G projects because of the great profits, as discussed in previous blogs. In this post, I'll focus on seven remarkable V2G project stories across the globe. So, let's get to it!

Equigy is a crowd balancing platform founded by Swissgrid, TenneT (a German transmission system operator), and Terna (an Italian transmission system operator) in Switzerland as a joint venture in entire Europe. "Crowd balancing" refers to balancing the grid amidst primary energy sources, decentralized energy resources (such as solar and wind), and energy consumers via V2G.The project is involved in the discourse and activities of decarbonizing the energy system and making the energy sector, particularly in Europe, independent of fossil fuels by 2050.Equigy partners with GreenCom Networks to conduct tests to avoid bottlenecks for decentralized energy producers and consumers in the transmission system and reduce power generation and consumption fluctuations.A successful pilot project on the Equigy platform started in early 2020 and lasted until that year. How did it work? The Equigy platform uses recent technologies – blockchain and the Internet of Things- to manage various energy sources to balance the grid. Challenges and outcomes - The pilot project was completed with Alpiq, who served as the technical and commercial aggregator. As a result, it was able to prove the efficiency of blockchain in managing distributed energy resources.

Grid balancing was the central focus of the Grid Motion project in France, and it ran from 2017 - 2019. This project was privately funded and done on a large scale to effectively evaluate how much balance and stability can come to the grids with V2G. The partners for this project were:

To achieve the goals of this project, 15 EVs provided frequency response services to the DSOs. The electric vehicles provided by Groupe PSA used in this project were B2B EV Peugeot iON alternated with Citroën C-ZERO vehicles. They were V2G enabled, and to charge them, Enel DC bidirectional chargers (10kW) were installed. For the V1G applications, however, fifty (50) Nuvve chargers (18kW) were used, mainly installed at places of residence.During the project, different drivers plugged into free chargers at various times, according to their charging behaviour and used the car throughout the day. In both V1G and V2G applications, an app gave the Nuvve chargers (which use CHAdeMO charging protocol) information on driver preferences and specifications for a charge. Challenges and outcomes: Being the first V2G project in France, the team encountered some challenges, like the unavailability of cars compatible with bidirectional AC chargers. Also, the market was not ready because of regulatory barriers for energy storage, with the TSO, TPI, and energy users all scoring a readiness score of 1 out of a possible 10.

Re-dispatch V2G was a project that focused on proving the technical ability of service fleets of TSOs themselves to solve the problems in power transmission in Germany. TenneT (a transmission service operator), the Mobility house, and Nissan were partners in this project funded by corporate funding and TenneT.How did it work? A routine system was set in place, such that the field service fleet in the premises would be able to provide mobility for TenneT, the TSO premises itself. The service fleet included a total of Nissan LEAFs and ENV200 (each with a capacity of 40kWh). During standard working hours, these vehicles (the fleet) were used in a scheduled routine then plugged in overnight to allow availability.V2G and V1G chargers were used to charge these vehicles in northern Germany and southern Germany stations. The V2G chargers made by EVTEC had a capacity of 10kW, and the V1G chargers used in the north were 7.36kW chargers.Challenges and outcomes: As a technical project, the focus was not based on customers or costs but on the technical ability of the EVs. For example, it was observed that the EVTEC chargers were good enough but weren't available in larger quantities.At the end of the project, the team concluded that there's a high market readiness for implementing V2G on a large scale. However, regulatory bodies needed vehicles participating in V2G to be registered as producers and consumers of energy, leading to more levies.

Stellantis fast reserve or ultra-fast frequency regulation is a unique and upcoming V2G project awarded to FCA, a subsidiary of Fiat Chrysler Automobiles, and ENGIE EPS, an Italian technology player in Energy Storage, Hydrogen and e-Mobility. It is planned to operate in Italy from 2023 - 2027. The objective of Stellantis fast reserve is to provide 25MW of V2G flexibility to Terna, an Italian grid operator, for adequate grid frequency stability. The team will achieve this by using ENGIE EPS V2G technology with FCA's fleet of vehicles (New Fiat 500) located in their complex in Turin, Italy. What is unique about this project?Stellantis fast reserve will be using second-life batteries for this application, making it the first large-scale application of V2G integrated with second-life batteries.Challenges and Outcome: The project is yet to kick off. However, if the second-life battery application proves sustainable, there will be a greater awareness to maximize battery lifecycle through V2G and more cost-saving.

5. Network impact on grid-integrated vehicles (the US, 2018)

The Northern Power Grid (NPG), partnering with Newcastle University and Nuvve, embarked on this project from 2017-2020, which involved navigating the commercial and technical effects of integrating vehicles into the grids on the distribution network. To carry this out, funding of £375,000 from NIA (Network Innovative Allowance) was used. With the available resources, the project did not focus on customer offers but commercial ones, aiming to observe what the vehicles could offer to the DSOs.The available EVs for this project were the fleet of NPG, consisting mostly of Nissan NV200s. These EVs were to engage bidirectional charging at 19 charging points within the premises of NPG offices. Also, each of the charge points was installed by Nuvve and were MagnumCap 10kW DC chargers.Challenges and outcomes: The research concluded a ready and highly active demand response market and electric vehicles could be readily integrated into the grids as the chargers have been tested in an operational environment.

The Parker project, which spanned over two years, aimed to test the use of electric vehicles to service grids. In addition, it experimented with the possibility of real fleets meeting this using different cars that could be compared on a scale. With this attempt, the Parker project was able to identify and address the barriers to commercialization, meeting its goals.The financial aspect of this project was valued at 14.7 million DKK and sponsored by FerakEL. The partners collaborated to provide services to Transmission Service Operators, Distribution Service Operators, and Third-Party intermediaries in Denmark. The vehicles used were Nissan LEAF 30kWh, 10x Nissan E-NV200 24kWh, and Mitsubishi Outlander 12kWh, charged with fifty ENEL 10kW DC chargers.Challenges and outcomes: Parker had a challenge with the high taxes on EVs, especially in Denmark as of 2017. This limited the rollout of EVs and chargers. Nevertheless, with the mobility-as-service offer to customers and the maintenance tools readily available, this project met most of its goals. One particular point proven by the Parker project was the ability to effectively provide frequency containment to TSOs.Some other challenges, which are more technical than social or financial, include the inconsistency in capacity and requirements regarding the duration of service. This led to a bias that can only be fixed by more research. Also, the impact of battery degradation was a concern. Still, the answers provided by this project are valuable and proven to be good.

Lambok neighbourhood was the location for this pioneer V2G project. It was kicked off by Lomboxnet and four other partners (LastMile Solutions, Renault, StedIn, and ElaadNL). It focused on developing a system that allowed an increase in EV and solar power infrastructure and making AC standards for V2G.The team installed 22 AC chargers of 22kW each in a city car share scheme for EVs to charge unidirectionally. These charge points by the Seers group and the people group were used with 40kWh Renault Zoe EVs in the public neighbourhood of Lambok. After the project ended in 2019, follow-up plans were to scale up to 1000 EV chargers.The project has been expanded to other pilot areas in the Utrecht region to ensure;

Challenges and outcomes: Despite the favourable customer offer, only 10% of the chargers were occupied and could charge in 2019, and 50% were not charging. However, with the 22 public AC solar chargers, a solid energy transition step has been established.This blog is part of a V2X series. Continue to the other blogs in the series.