A-Z of Smart Grids - a Glossary 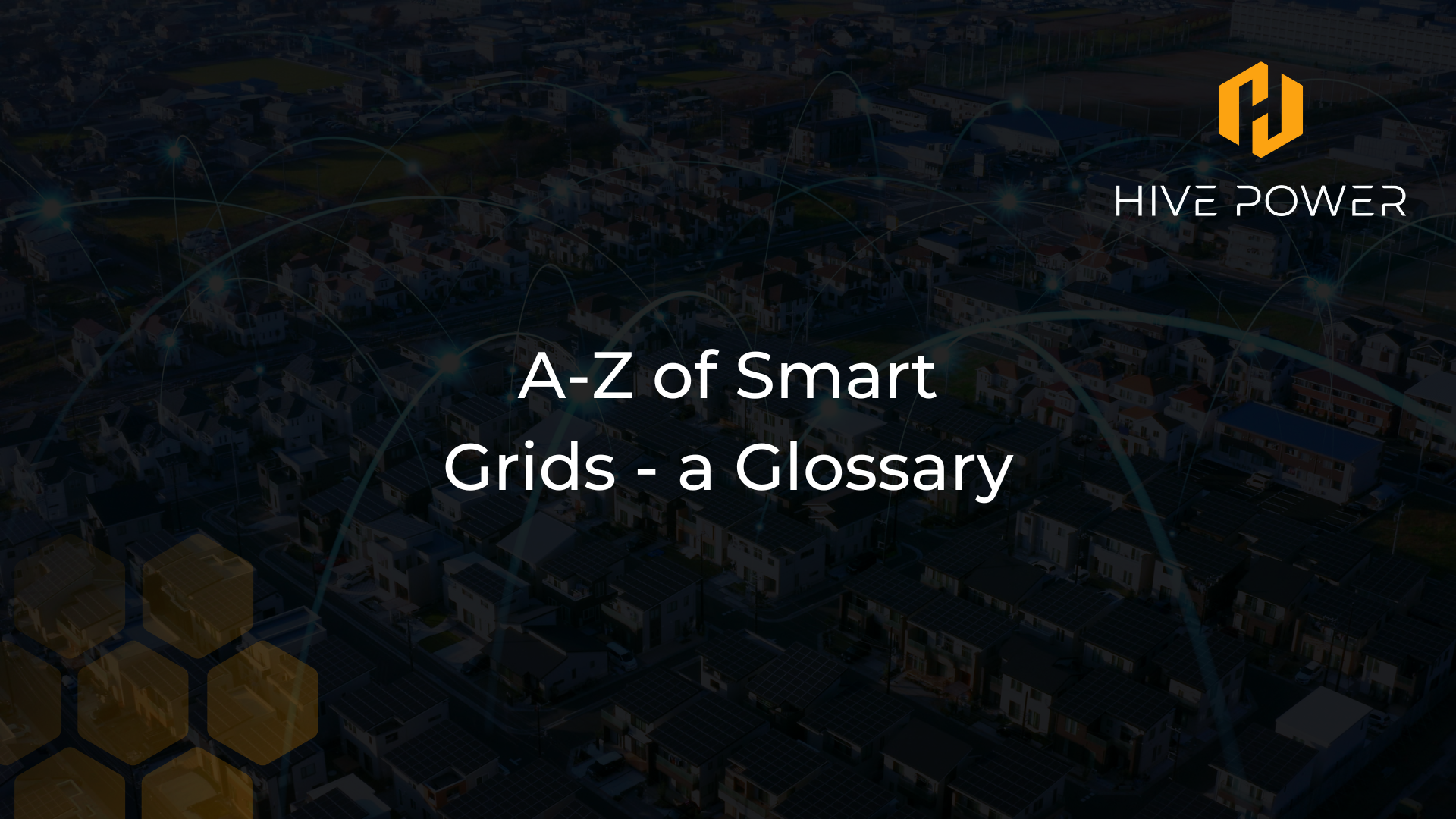 A smart grid is an electricity network that differs from the traditional grid because it is built on digital technology that can distribute electricity to users via a bidirectional digital platform or network.

Whenever smart grids are discussed, the technical language associated with them never goes unnoticed. But unfortunately, many of these words often come off as alien to anyone unfamiliar with the terminologies of electricity and smart grids.

Below is a guide containing essential aspects of the energy world, specifically parts funnelled toward discussing smart grids.

AMI is the substrate upon which a smart grid functions. It is a unified network of smart meters, data management setups, and communications systems that enables a bidirectional interaction between utilities and energy consumers.

The network offers several essential functions, such as automatic and remote measurement of electricity consumption, remote connection and disconnection of service, fault detection, outage identification and isolation, and voltage monitoring.

When AMI is synergized with in-home technology, such as the Internet of Things, it can authorize utilities to provide time-based rates and incentives that make consumers manage peak demand and significantly reduce energy consumption.

AMR is the technology responsible for coordinating data collection about electricity consumption, diagnosis, and condition.

With AMR, data is not only collected but also transferred to a principal database for the issuance of bills, troubleshooting grid faults, and analyses of collected data for future purposes.

AMR assists utilities in getting immediate alerts in events of energy meter tampering, reducing human labour and expenses and eliminating losses that may arise from manual error.

The average demand is the electricity demand from a given geographical area over a certain period. It is calculated by dividing the amount of electricity consumed, in kilowatt-hours (kWh), in 24 hours by 24.

The average demand figures are a necessary tool deployed by utilities to estimate how much electricity will be supplied to specific geographical regions during peak demands.

Peak demand is the highest amount of electricity consumed in a 15-minute or 30-minute period in a month. Smart grids are interconnected with the smart meters that they feed, so this makes it easy for transmission monitoring and data collection.

Suppose, in the past, you have demanded little to no electricity from the grid, which holds the same for every other home served by the same utility. If one day you decide to use every appliance in your home, thereby shooting demand up to a record-high for that month. This sudden spike (the peak demand) tends to shock the grid. The utility will work with this peak demand in its electricity supply to prevent further spikes.

When electricity consumers are offered the opportunity to contribute to the grid to sustain grid management and balance demand and supply, the program is called a demand response program.

With a demand response program in place, consumers play significant roles in smart grid management by adjusting their electricity consumption during peak hours in response to time-based pricing. This adjustment, in turn, lowers both wholesale and retail utility costs.

There are three common plans associated with it:

Real-time pricing - which offers pricing at short, typically hourly, intervals so consumers can shift high energy-demanding tasks to when rates are cheaper.

Time-of-use pricing -  segments the day into longer intervals with fixed prices over a long period.

DG is the central idea for decentralized grid systems. It refers to a diversity of technologies, such as solar PV panels, combined power and heat (CPH), and wind turbines, that generate electricity close to where it is being consumed.

DG can be deployed for wide-ranging applications irrespective of size. For instance, it can be used for a singular purpose, such as a building or bigger structures, such as an industrial establishment. DG can also be integrated into microgrids connected to the main grid.

A DS is a part of a power system responsible for distributing electricity to consumers for final use. Electricity consumers generally do not have energy stations installed in their places of consumption. Instead, the distribution system transports electricity from transmission systems and substations to the consumer.

Unlike internal combustion engine vehicles (ICEVs), EVs run on batteries that do not require fossil fuels to operate and contribute less to zero carbon emissions.

The three main types of EVs are:

Battery electric vehicles (BEVs)— use purely electric current and are rechargeable at EV charging points, and

Fuel-cell electric vehicles (FCEVs)— use the reaction of hydrogen to run but release only water vapour as their by-product.

EVs contribute to the grid through V2G charging and smart charging.

The electric power company that generates and distributes electricity for sale to final consumers.

An energy community includes prosumers who share and consume locally produced renewable energy. It is essentially a unit among many units that are interconnected across various networks and collectively connected to the grid.

A FIT is one of the policy tools created to aid the promotion of renewable energy sources and the investment therein. This usually revolves around distributed generation, where individuals or a small group of people generate their renewable energy by themselves.

FITs typically involve support for these groups of consumers who generate their renewable electricity and demand long-term contracts, usually between 15 and 20 years.

A kilowatt-hour is a standard measurement unit that records how much energy is being demanded or consumed. It is simply the amount of energy dissipated if you kept a 1-kW appliance running for one hour.

Load is the amount of energy a transmission station supplies to meet these energy demands.

The load factor measures the efficiency of electrical energy usage or the usage rate. It tells us how much of the energy supplied is indeed utilized. To get the load factor of a given community within a specified period, the first thing to do is to get the average electricity supply to the said community and divide it by the peak demand within the same period.

Load management is a superset of demand response. It is the process in which utilities try to adjust their daily, monthly, or annual load curves by manipulating the demand to achieve the most beneficial economic operation.

When utilities manipulate demand, they lower peak demand through demand response and rebates.

Sometimes electricity is inaccessible to people in rural or local communities because of their remoteness. Municipal electric utilities exist to solve this challenge. They are utilities owned, operated, and managed by the local government.

Also known as remote meter reading, OMR is a method that employs the use of radio-equipped handheld terminals to take readings off module-furnished electric or smart meters remotely. With OMR, meter data can be retrieved by moving within a radius of the meter from which information needs to be obtained.

RF signals or RF emissions are the energy affiliated with electromagnetic waves. They are emitted by various everyday devices such as phones, computers, microwave ovens, and smart meters.

Smart meters use a low-power 900MHz radio to communicate, and they typically have a 2.4GHz radio which is never used for network communications.

A grid protection relay or mains protection relay is a device used for power quality control. It serves as the gateway between the energy source and the grid, filtering only the quality and quantity of electricity suitable for the grid.

An important component of relays is anti-islanding. Anti-islanding is a type of protection for renewable energy sources such as solar PV panels and wind turbines connected to the grid. It protects both personnel and equipment by disconnecting supply from these sources to the grid in events of blackout.

Renewable energy, also known as clean energy or green energy, is simply energy generated from natural sources that can easily be replenished with little to zero carbon emissions.

Renewable energy sources, also called renewables, are the elements from which this energy is generated, and they include:

REPS is a regulatory obligation imposed upon states to invigorate the promotion of renewable energy. This includes the mandate given to electricity supply companies to generate certain fractions of their electricity from renewables.

There exist cases where utilities find it difficult or impossible to maintain a healthy balance between supply and demand. In such cases, demand outweighs supply, putting the grid and every other piece of equipment at risk of failure.

To forestall this event, utilities shed electricity in a process called rolling blackouts. This process involves slowly cutting electricity supply from certain regions until the balance is restored on the grid. Besides preventing grid collapse, this method also helps preserve supply to sensitive destinations such as hospitals.

A smart meter is an electrical measuring device that records the necessary electricity consumption data and sends this data to the utility through remote communication. Typically, a smart meter interacts with its corresponding utility every 15 minutes or one hour.

The smart meter can also automatically dispatch information regarding power outages, blackouts, and faults to the utility for quick response.

The Internet of Things (IoT)

IoT broadly refers to devices with sensors embedded in them that can process information for fluid interaction with other similar devices over a mutual communication network.

A microwave oven in the kitchen communicating with a mobile device in the bedroom of the same building to alert the occupant of burning food is a good example of IoT in action.

These devices can communicate with a smart grid as effectively as smart meters, relay relevant information, and receive information back.

A WLAN is a wireless means of distribution between multiple devices. With WLAN, users don’t have to be static but can shift position while still keeping a steady network connection.

Devices that connect to a WLAN are categorized into two:

Book a slot with our team to understand how Hive Power can boost your smart grid projects with our FLEXO solutions.